The sun sets from my vantage point perched atop a mountain on Tortola in the British Virgin Islands.

The moon is reflecting off the bottom of the pool. I look down to see up. Directly in front of me is infinity and I see the saints; John and Thomas, rising up from the sea. No, I’m not dreaming and no, the drugs haven’t just kicked in. This is me taking a late evening dip in the pool, atop a mountain on the outer edge of the Caribbean Sea.

How did I get here? It would be easy to say planes, trains and automobiles (and boats). So I will; it took us 14 hours to travel from our home to this infinity pool looking out over the bigger and tinier Virgin Islands dotting our 180 degree view.

Marci snaps a photo at the infinity pool’s outer edge.

On our way, we passed boats still banged and tangled up, tossed ashore, abused by Hurricane Irma a few years back. There was even an abandoned cement truck stuck on its side in the undergrowth and overgrowth, looking like a child’s oversized discarded toy. Despite some outward signs like that, though, this island of Tortola is coming back from impossible devastation. Concrete roofs were blown off buildings. Concrete!

Our hosts have been helping the island rebuild while they themselves reconstruct their own home. They are extremely caring, dedicated folks and will likely soon be related to us, our in-laws. Though they are already becoming family. But we are non-Belongers. So are our hosts. There is a complicated legal definition of who is a Belonger here in the British Virgin Islands — but suffice it to say — we are outsiders looking in. 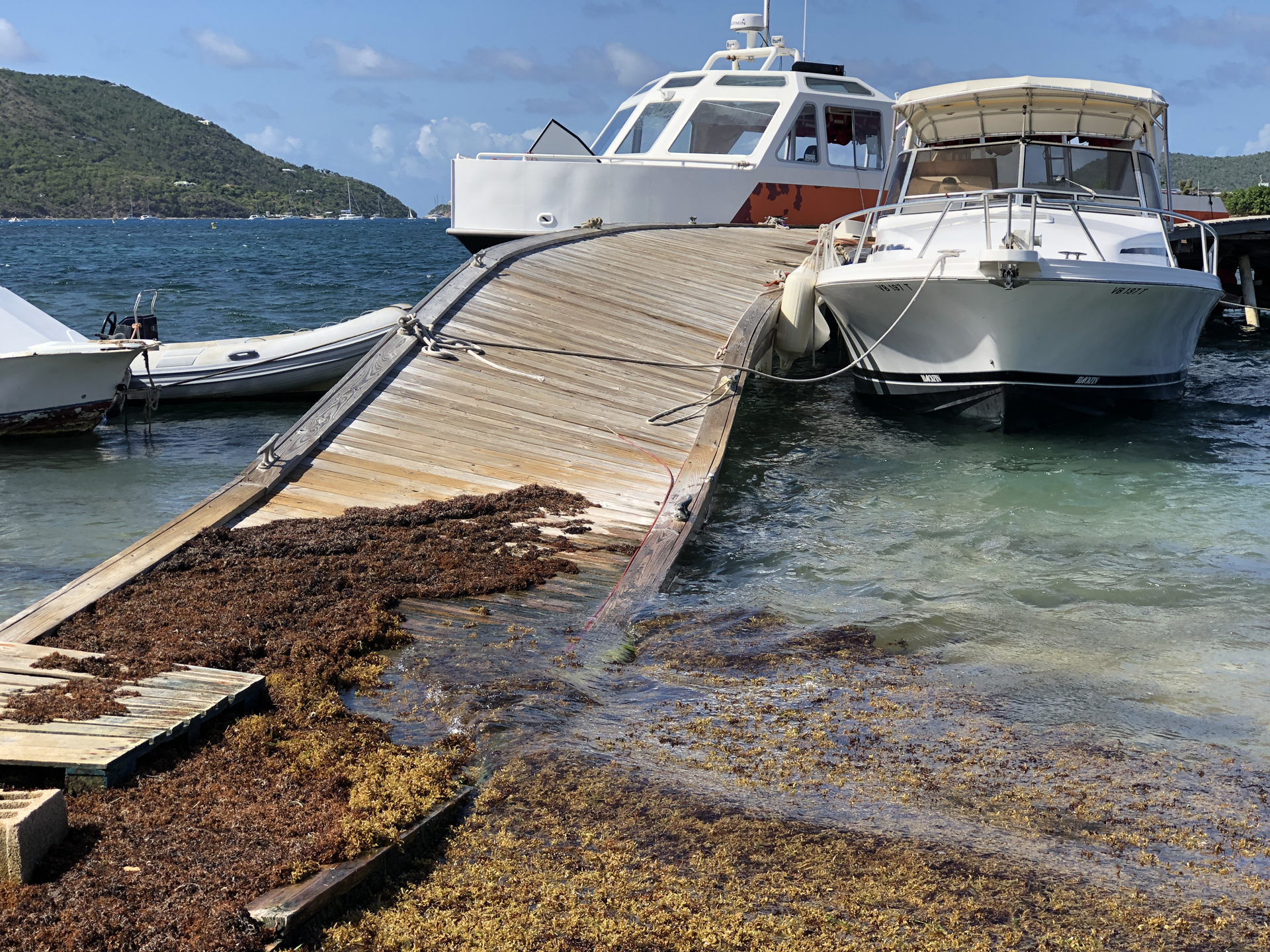 Just across the beach from Aragorn’s studio, boats tie up at a still-twisted dock after Irma decimated the islands.

Tinga’s a Belonger. He yells at me every night when I wake up between sleeps and wander outside to gape at the stars. Tinga survived the hurricane and seemingly wants to tell me about it every evening. I watch him drink water out of the pool and sometimes fill his bowl. He purrs and kneads my lap in appreciation afterwards.

Don’t even THINK about not scratching Tinga when he shows up on your lap. (photo by Skye Curtis)

Whereas Tinga remained calm during Irma, the Buddha lost his head. It’s cemented back on, as is one of his hands as he sits back atop the highest point of this spectacular place. He’s accessible via two different stairways and at the end of the steepest, hairiest drive you’ve probably ever taken. I like saying there are three different pathways to the Buddha.

Oh right, the drive up. My wife lost track of the number of switchbacks, the hairpin turns, climbing up here in the four-wheel-drive. Turn off the air conditioner; roll down the windows please. You’re gonna need all the engine’s torque in low gear to ascend to paradise. She did the drive after the third day. It was heroic.

Driving on this 12-mile-long, three-mile-wide island requires an alertness not normally needed in your daily commute. A donkey, cows, chickens, roosters and an invasive iguana all decided at one point or another that they owned the passing lane. And that goat halfway up the mountain every darn day was as perplexing as it was calm. None of this bothered our hosts, however; they happily drove us everywhere — pointing out and stopping at the gorgeous, but mostly abandoned beaches for a walk or swim.

Kent took us to the ruins of an old sugar mill on the island.

We also stopped by the old ruins of a sugar cane mill, a throwback to the time when plantations were the foundation of the island economy. We saw where the freed slaves lived, but more importantly, where the yearly three-day Emancipation celebration happens in Road Town. Their freedom happened thirty years before Lincoln’s Proclamation.

“Good morning, good afternoon or good evening.” Say one of those phrases upon meeting a Belonger and you’ve proven you’re a well-mannered person. Is your car partly empty? You should probably pick up that person standing on your side, the left side of the road. Take them not just as far as you’re going; take them all the way to their destination. In exchange, it’s incumbent upon them to tell you their life story. We non-Belongers don’t make the rules; we just must follow them.

Never was my non-Belonger status more apparent than when I tried to snorkel off a catamaran yacht, hopping between the smaller islands off the bigger island. I clearly didn’t belong in those waters. There’s something wholly eerie about floating above a 150-year-old shipwreck. Add sea life to the mix and all I could think about were sharks, killer anythings, or that big ol’ barracuda lollygagging in the shade under our boat.

My sailor father’s retirement dream was to boat around the Caribbean. The crew let me take the helm for a hot minute to honor him and Marci snapped me at the wheel after I, myself, snapped some shots of beautiful aquatic life both under and above the water.

I did it three times though. I even faced down panic when I inhaled a tube full of seawater and forced myself to calm the heck down, tilt back and just gaze at the sky as I slowly kicked my flippers and my breath came back to normal. Oddly, I was soothed by seeing a school of scuba divers far beneath me. Whether or not it was because I guessed they’d get bit first by the sharks, I really can’t say.

None of the impossibly beautiful beaches got much more crowded than this, populated by Marci and our hosts Kent & Linda Sue.

Our extremely gracious hosts fed us some fantastic food. When we weren’t dancing ‘round the kitchen singing Coldplay’s Viva La Vida, we were eating out. Restaurants around the island, as well as the beaches and grocery stores, were the first to come back from the storm. The reason being, it was vitally important to the island’s economy that tourists — cruise ships and sailors — visited and told others to do the same. I ate delectable jerk chicken, fish and some great Indian food, including their popular roti sandwiches; fish, chicken or vegetable. 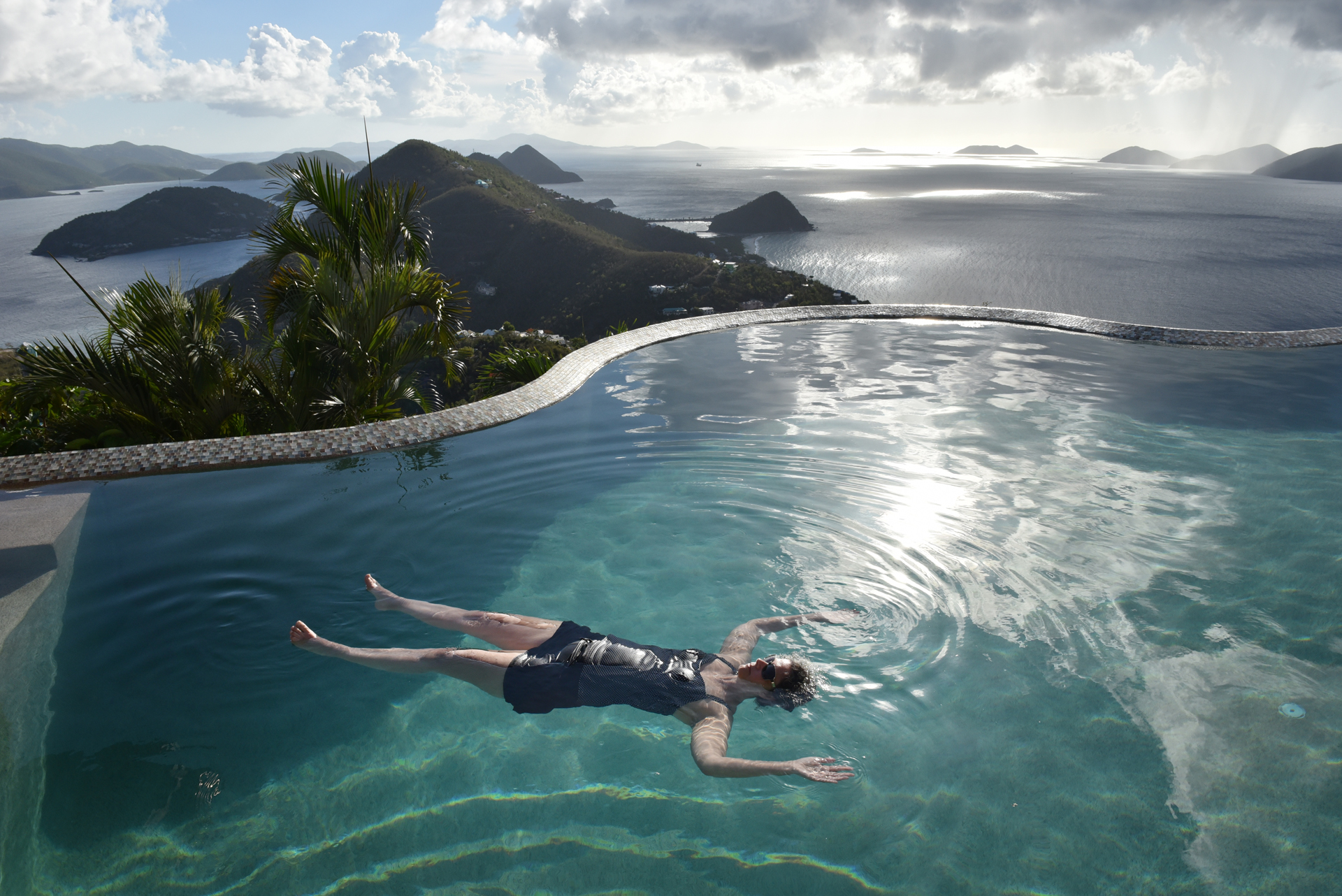 She stayed like this for quite some time, on multiple days. Wouldn’t you?

Mostly, though, there was the pool. I know it sounds slovenly, lazy or — shudder — typically American. But floating in this panoramic pool was the focal point of island time for us. A hint of saltwater, no smell of chlorine, you could sip coffee or something a little stronger while pretending you’re a lollygagging barracuda getting your drink on. 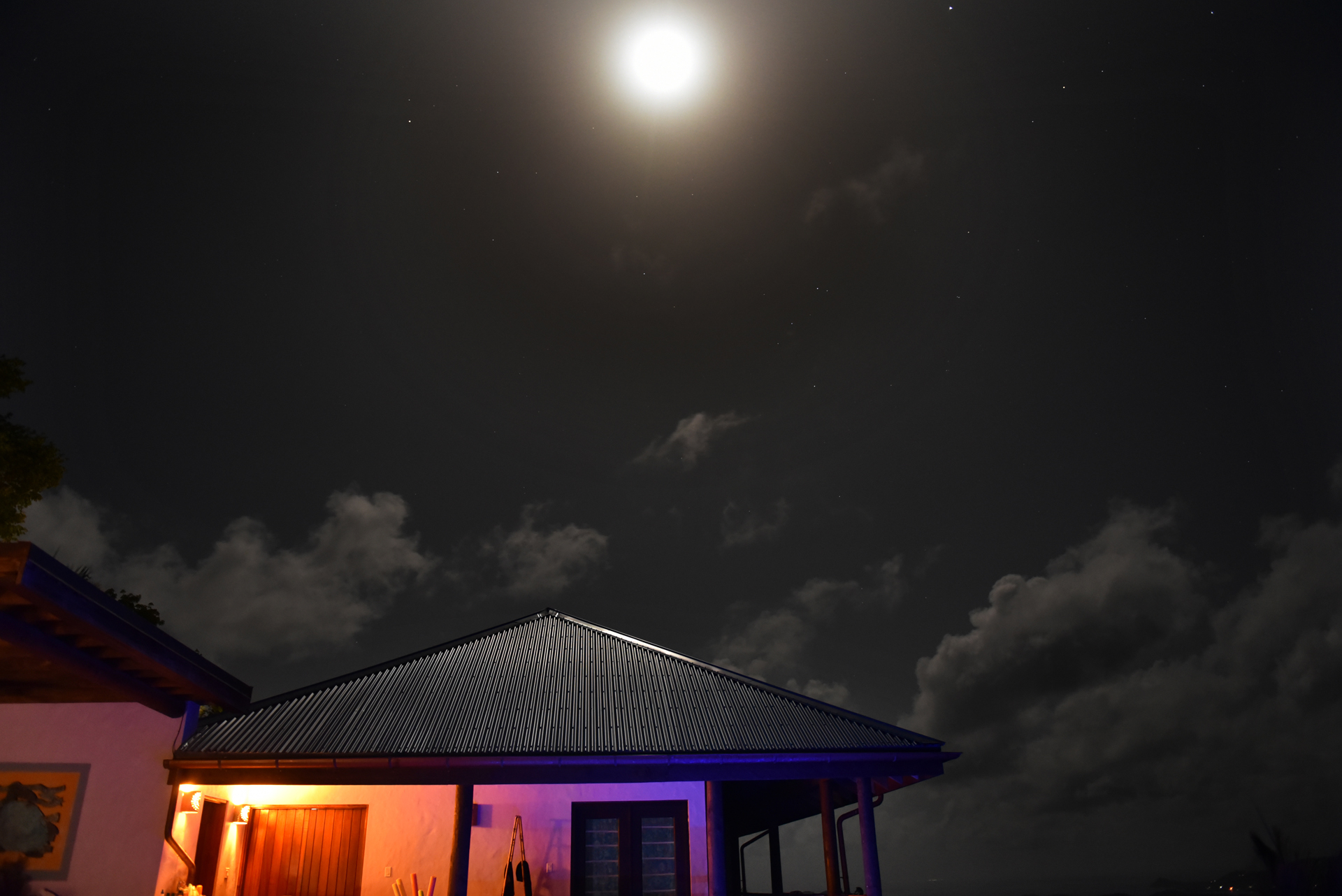 No matter where I looked, up or down, the moon and stars put on a display rivaling the daytime 180 degree view.

The moon is almost full now. We drive from one end of the island to the other; twelve miles takes about an hour. Aragorn, (a local artist, not the Lord of the Rings character), has a studio at the furthest tip of Beef Island, attached to Tortola via bridge. He repurposes large nautical steel spheres — cuts fantastic shapes into them — and stuffs ‘em with wood to set unforgettable fires in for his monthly full moon parties. We have to leave before it begins. My daughter and her beau will come back for it, though.

Ah, coming back. I hope we’ll be asked to return sooner or later. Maybe there’ll even be a wedding here. But we’re non-Belongers. Even our hosts aren’t allowed to live here year-round, as much as they may want to. They rent out paradise when they can’t reside here. Tinga comes along with the rental. If you go, make sure you scratch his little head whenever he asks.

And have a sip of something at the edge of infinity for me. 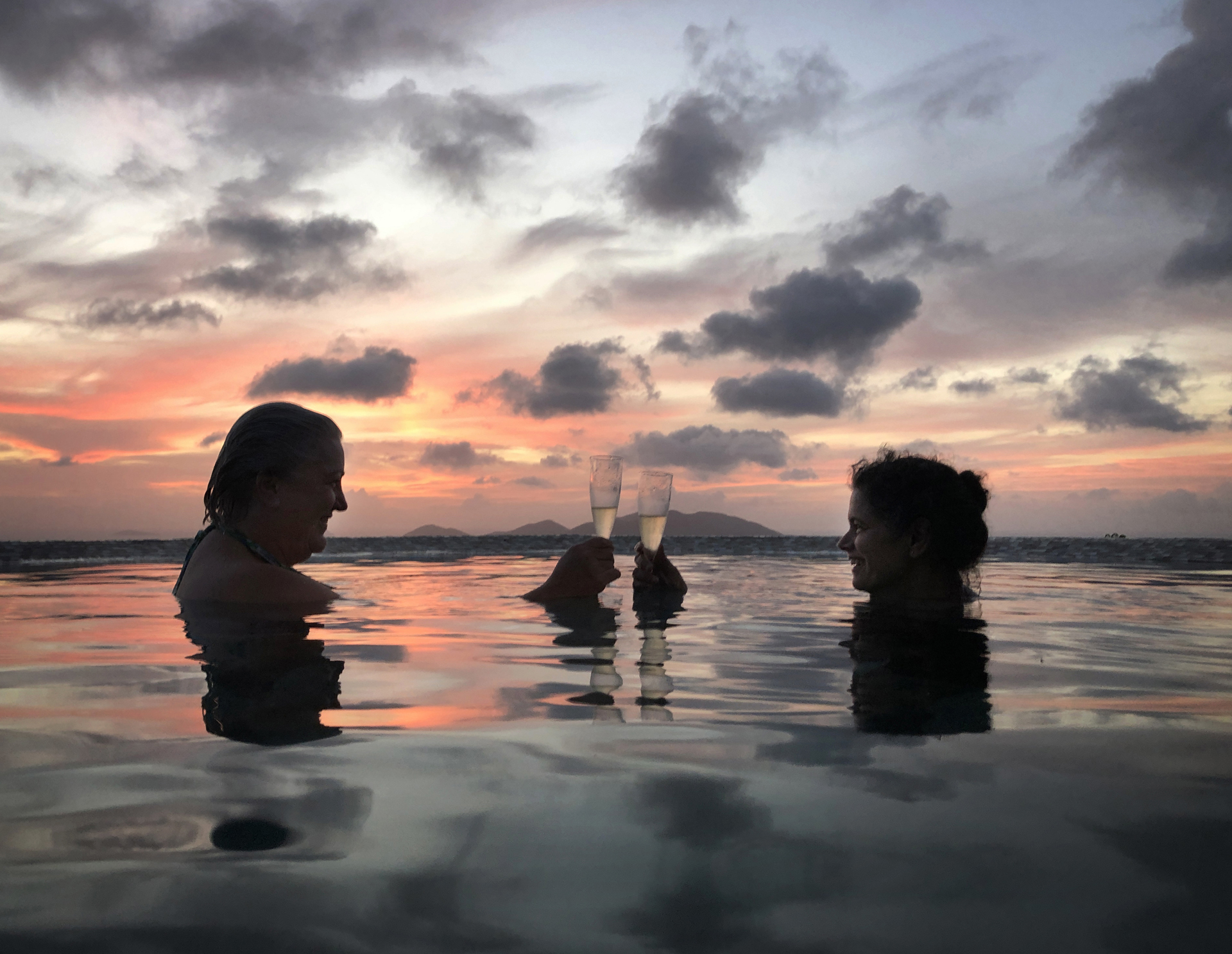 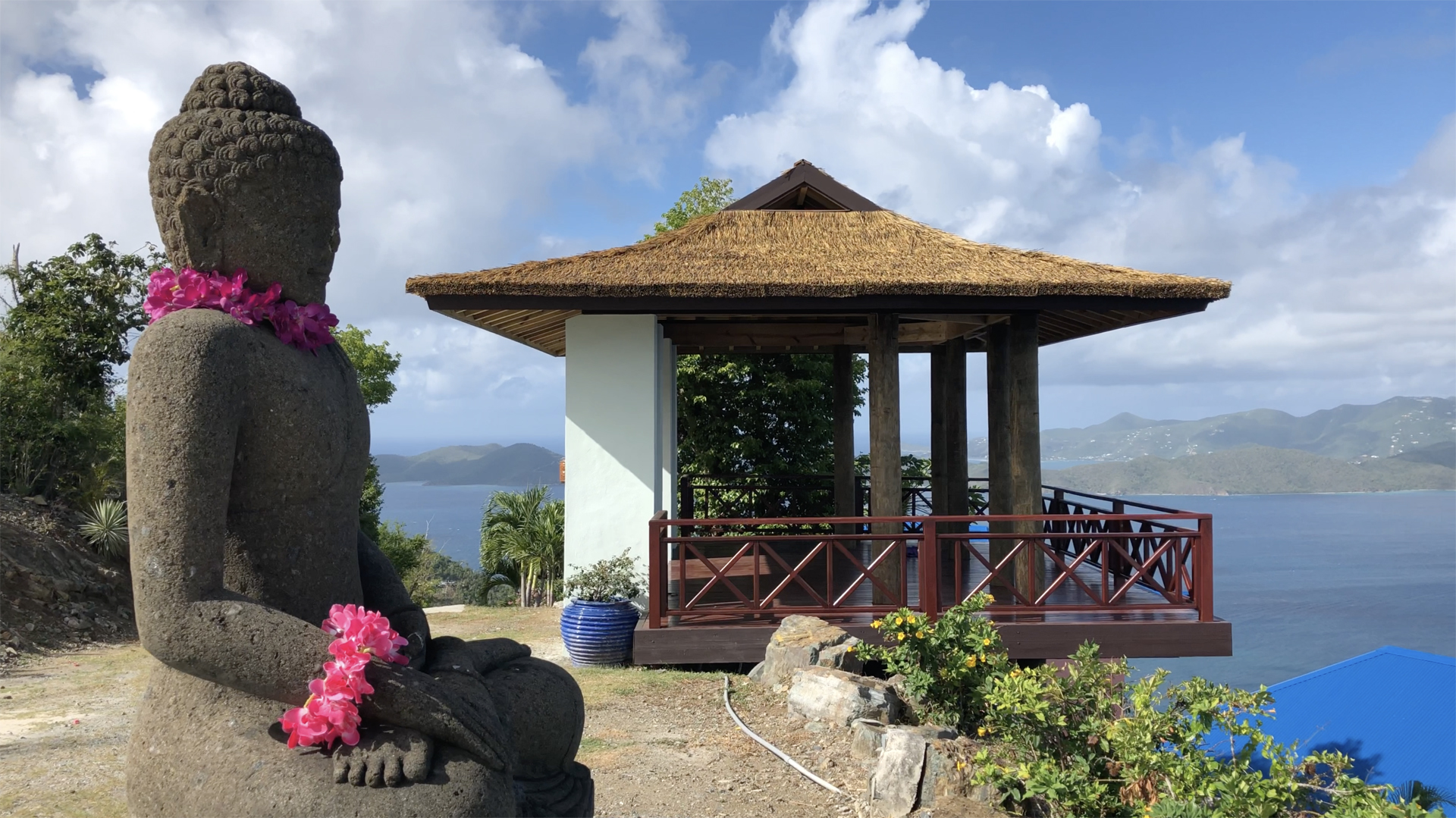 Temporary flower leis were wrapped around the Buddha’s neck and wrist to hide the hurricane’s devastation. And after doing yoga in the open-air studio at right, I’m spoiled for the practice anyplace else.

Everywhere, literally EVERYWHERE, were smack-you-in-the-face views like this, even when a rain shower blew across the islands. 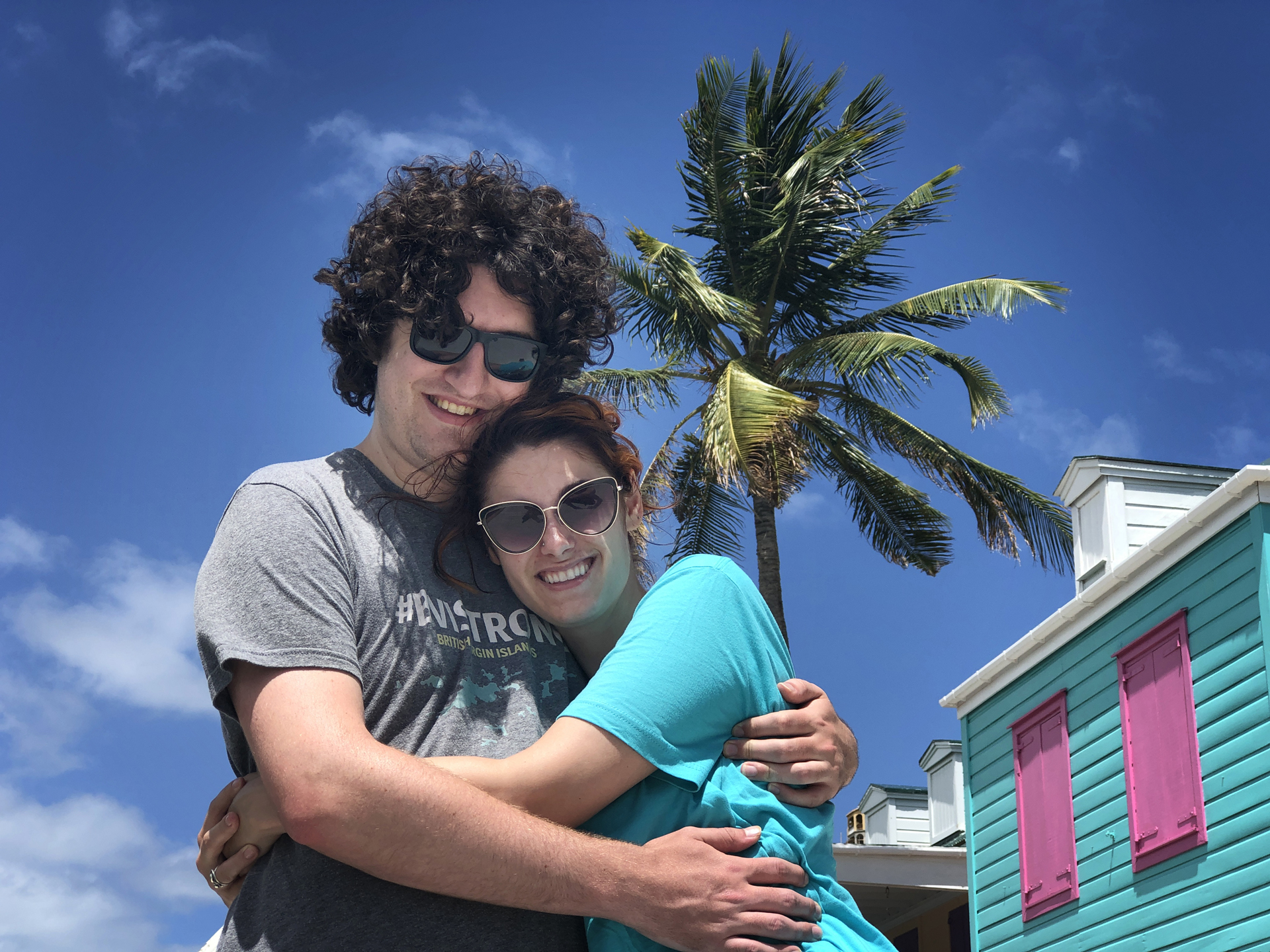 Bryan and Skye convinced both sets of parents to meet and spend the week together. Believe me when I say it took zero arm twisting.

Another pool picture. But put yourself in my position; wouldn’t YOU do the same thing?